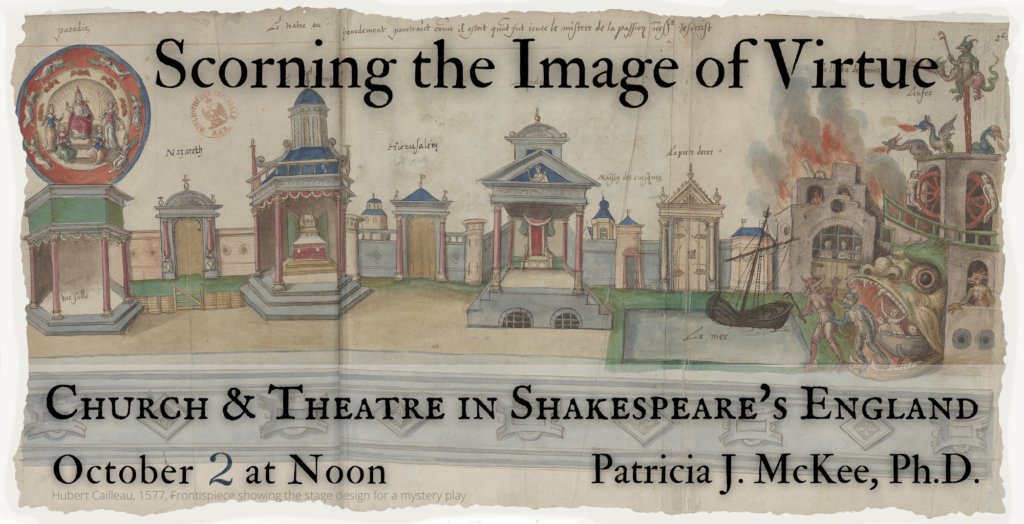 This two-part series, presented by Dr. Patricia McKee, focuses on the relationship between religion and art. Dr. McKee will speak to the rich but conflicted nature of that relationship and why its nurture is vital for the survival of the arts in religious and civic life in America. Join us for Part 1 on October 2:

“Scorning the Image of Virtue: Church and Theater in Shakespeare’s London” October 2 – Reception at 11:30; Talk starts at Noon. Fiske Hall.

Theatre was a threat to the church in the Shakespearean era, and one popular actor was berated from the pulpit by a preacher hell-bent on casting out the competition.  Join Dr. Patricia McKee for an entertaining and educational look at how preachers and players competed for audiences during the rise of the public theatres in Shakespeare’s England.

Everything We Are and Do

Volunteers who teach, lead or assist with an LRE program at The Universalist Church of West Hartford are asked to complete a helpful and engaging training program as the church year begins. The Senior Minister and DLRE co-teach, offering training in various formats in September and October.

Co-led by the DLRE and Rev. Adam, this is a weekly or twice-monthly study that may take the form of a small group, or it may be taught for a larger group of up to 40, with short breakout discussions.  For the 2022-23 program year, a comparative religions approach will be used to examine the use and symbolic meaning of water across major world religions. Part one of this series engages the central role of water in the Abrahamic traditions; part two, in American Indigenous religion. In addition to drawing on sacred texts, the series will make intentional (and perhaps primary) use of artifacts and a range of artistic expression to teach and learn.

This is a peer-led opportunity that uses a particular book to launch discussion and learning. The facilitators and participants may set the pace of the study. For the 2022-23 program year, we we’ll explore Healing the Heart of Democracy: Courage to Create a Politics Worthy of the Human Spirit by Parker Palmer. From Publishers Weekly: Palmer bravely takes on the current political climate, with its atrophy of citizen participation, the ascendance of an oligarchy that shapes politics, and the substitution of vituperation for thoughtful public discussion… His use of acute 19th-century observers of American life and character –Tocqueville, Lincoln — as well as his use of anecdotes and lessons from his own long career provide context and tonic… Hope’s hardly cheap, but history is made up of what Palmer calls “a million invisible acts of courage and the incremental gains that came with them.”

FOR MORE INFO AND TO REGISTER:

Click the buttons below to contact our Director of Lifespan Religious Education, Dr. Patricia McKee, or to register for these programs.

“Scorning the Image of Virtue: Church and Theatre in Shakespeare's London” - presented by Dr. Patricia McKee. Reception at 11:30 AM; Talk begins at noon. Fiske Hall.

Vocal warm-up for the Worship Service performance. 9:30 AM

If you have questions or would like to register for any of these events, email us.